I don’t know about you, but for me, this scale is not useful AT ALL. I’ve gotta tell you that the yellow face looks more constipated than in pain, and the utter horrible face seems more like he’s upset that his flight got canceled and he’s going to have to eat at Chile’s.

I’ve been thinking about pain a lot recently, mostly because I’ve been experiencing varying amounts of it recently. Last year, my neurologist began to suspect that some of my symptoms (extra high heart rate, ringing in the ear, and postural headaches) might be caused by a spinal fluid leak. We took a bit of a gamble and decided to try a procedure called a blood patch that would fix the leak if there was one. And it worked! The procedure itself was painful, I was couchbound for a few days and it took a week or so to feel normal again, but it worked and it was worth it.

As I implied earlier, I’ve been in some pain. You may have even inferred that I had a new leak. This is all true, but it’s not the reason that I’ve been in so much pain- this time around, the blood patch wasn’t nearly as straightforward or worth it.

I won’t describe how a blood patch works (you can google it if you want) because it makes some people squeamish, but some degree of pain and discomfort is normal. I can handle normal. The first 48 hours after seemed pretty normal, but normal disappeared pretty fast after that.

At one point I rated my pain as an 8, which may not sound like a bit deal until you hear this fun fact about me. Several years ago, I was in the emergency room with GI pain. The lady at the desk saw how much pain I was in and got into triage almost immediately so they could get me admitted and on some pain medication.

I sat in a chair, and a nurse starts talking to me, and I pass out. I wake up almost immediately and then pass out again. I struggle to stay conscious the whole time I’m being interviewed, and at the end of it, the nurse asks me to rate my pain, and I rate it a 9. The nurse informs me that if you’re in so much pain that you can’t stay conscious, that is always a 10.

As I said, an 8 is a big deal for me. The 8 lasted 24 hours. The pain has been slowly drifting down the number line, but still, it’s been almost a month, and I’m tired of it.

I find it odd how I can tolerate chronic long term pain no problem. I dealt with an entrapped nerve for 10 months, I’ve had PCOS for more than a decade. But acute pain? Discomfort? I can’t handle even a little.

I’ve heard that this is an autism thing. Folks like me are either perceived as feeling too much, or not enough. But it’s so hard to tell because I can’t really describe the intricacies of my pain to you as much as you can describe yours to me. We all assume that our 5/10 pain is the same as someone else’s 5/10. Be we can be completely wrong! Mine could be burning and yours could be stinging, mine could aching and yours could be stabbing. It hurts my head, I swear.

I thought I’d leave you with my favorite pain scale, use it as you will 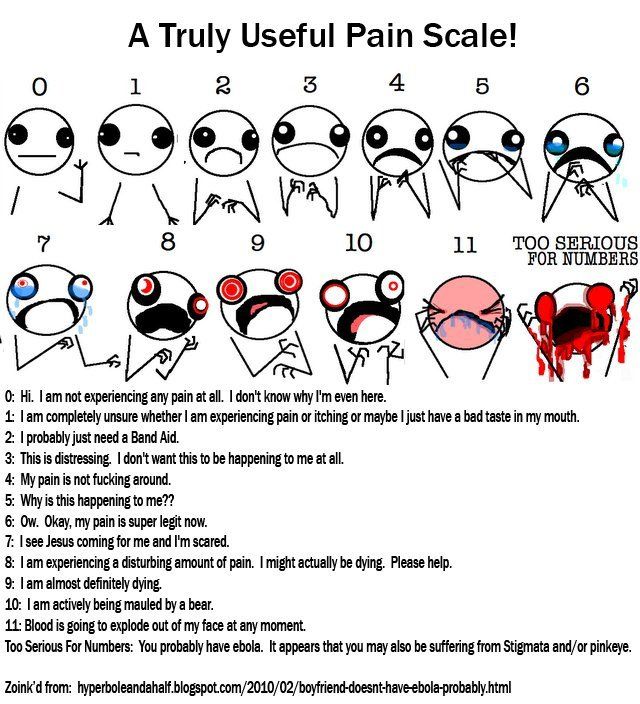